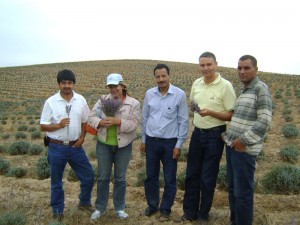 Victor recently visited the region of Oulmès in Africa on assignment for the Farmer to Farmer Consortium as a Lavender Production Expert. In his 15 days, Victor met with the Al Khozama cooperative to assist with the introduction of officinal lavender and to train members to improve lavender production.

Oulmès is a small village situated in the Middle Atlas in the Province of Khèmisset, the village is about 150 km northeast of Rabat.

The natural environment of Oulmès consists of plains, mountains and hills, trays and depressions. The soil of Oulmès is divided into brown hydromorphes soils, sandy brown hydromorphes soils, rocky soils, tier soils, and Litho soils. The climate is sub-humid with a cold and wet winter, fresh and dry summer, and 36 rainy days on average a year. The region received some snow between December and March and there are periods of frequent frosts of December till May.

Some of the objectives of Victor’s assignment was to identify and analyze the existing varieties and determine their compositions in order to know the valuation of limits; identify the diseases provoking the decay of plantations and production and training on the manufacturing of cosmetics and therapeutic products with existing plants.

View some of the photos from Victor’s Trip to Africa: